“What really makes the Great Wall of China so great?”  The question that had been floating in my mind all the way back into September when I booked a trip to China, just to see the ever-so-famous GREAT WALL.  Of course, I remember learning about the Great Wall at some point in school, but lets be honest, it wasn’t a heavily covered subject, and my memory doesn’t always serve me so well.  It’s one of those topics that have been categorized and filed in the brain, but are completely covered in dust.

So like any other trip, I decided to go into China with the little knowledge I had, looking forward to picking the brains of the locals.  I said it before, and I’ll say it again, this is my favorite way to gain knowledge of the local culture!  As much as I enjoy reading, I do not want to read a book or watch a documentary to gain insight.  I much prefer to experience it for myself, speaking to the locals and hearing first hand what makes their country great.  And in this case, ‘great’ was the exact word in question.

So what really makes the Great Wall of China so great?!?  I must say, I had the best local guide to fill me in with the details of greatness.  And experiencing it for myself, first hand, as I climbed this World Wonder gave me the insight and understanding I needed to finally answer my burning question.

To start; the official length of the Great Wall has been measured at 13,171 miles or 21,196 kilometers!! BOOM!  That right there creates an elevated amount of greatness. Granted it’s not just one long wall from point A to B, this length includes all known sections of the wall, built during at least seven dynasties, including all of its trenches, walls, towers, and fortresses.  To put that distance into perspective; get in your car and drive from New York City to Los Angeles and back, TWICE, and then drive another 2,000 miles just for fun.  Only then will you have covered the 13,171 miles that is the Great Wall.  Talk about an impressive architectural feat!  Imagine, no cranes, tractors, or excavation equipment, just a lot of men full of determination.

Another level of greatness comes from the history behind the wall.  The construction began in 7th century B.C. and continued on into the 16th century.  That’s over two thousand years of construction!  Most of the wall we can visit today was built during Ming Dynasty, 13th-16th century.  Over two thousand years of rebuilding, modifying and extending this seemingly ‘Great Wall’ created the greatest military defense project in history.  For those still wondering WHY the Great Wall was built, well, it was simply to protect China at different periods throughout time.  Initially construction began as independent walls for different states, this evolved into protection from invasions from enemies in the North, especially nomadic tribes and Mongols.  It also held some value as to keep Chinese people from leaving China.

So what did it feel like to climb on the Great Wall??  I am so proud to be able to tell you first hand what an exhilarating experience this was.  In the back of my mind as I was climbing stair after stair and steep grades, I felt as though I was a part of history.  I reinvented in my mind what it must have felt like to climb those stairs daily, patrolling the area, climbing into the fortresses to see the 360 degree views of the mountain tops.

There are ten most famous sections of the wall to climb to catch these incredible diverse  scenic views.  I climbed a section called the Juyongguan Pass, which was first constructed in 770 BC, and was rebuilt during the time of the Ming Dynasty.  The Juyong Pass was filled with steep sloops and uneven steps, sometimes measuring three feet tall.  Making it to the top of this pass, all the way to Fortress #12, proved to be a exhilarating climb, requiring a strong level of fitness.   There were many times I stopped to take a breath, thinking, ‘OK, I’ve seen enough, I’ll stop here,’ only to put those thoughts into the back of my mind and push through all the way to the top.  Unfortunately most climbers succumbed to the challenge, only taking in 500 steps or less.  But I was determined and alive with energy!  1,768 long steps later (yes I counted, but on the way down, as I was too excited to stop and take pictures while climbing), not including all of the steep grades and walks through the fortresses, I was deeply rewarded with photographic opportunities.  It truly was a sight to take your breath away, if you had any left from the climb.  360 degree views of mountain scenery and miles of historical walls.  I felt accomplished, refreshed, alive and proud.

Simply stated, the Great Wall is a clear demonstration of wisdom and tenacity, and YES it is GREAT!

I have to be honest, I wasn’t overly excited for my visit to Petra while in Jordan.  Since everyone claimed it was a must-see destination, and since I had previously put the goal into place to visit ALL of the new seven World Wonders, it also became a must-see for me.  So here I was on a trip to Jordan, being escorted and shown around by my Jordanian friend I knew from Abu Dhabi.  The timing was perfect, as he was currently visiting his homeland for a few weeks.  He truly was the perfect guide around Jordan, spending most of his life there, and having the same excitement as me to visit all of the spots he use to frequent as a child.

Petra was the underestimation of the century!  From the moment we entered the gates the red sandstone landscape was breathtaking! The way the sandstone had taken shape looked like a piece of creative art. As we were walking the path, my eyes gazed wide-eyed, taking in the colorful ‘art’ surrounding me.  At the end of the sandstone guided pathway, there it was, the most famous part of Petra, the Treasury Building.  Stunning, beautiful, grand, delightful; all words that could describe this carved landmark, but none that would do it justice!

Under the impression Petra mainly consisted of the Treasury Building and beautiful sandstone, I had no idea there was so much to discover!  Every way my eyes looked, I encountered a new piece of carved architecture and design. Petra, also known as the ‘Rose City,’ is actually 102 square miles, half built and half carved into the rocks.  It is filled with elaborate tombs and temples, beautifully carved into the pink/red sandstone cliffs.  This architecture is truly a must see!  There are so many times when people state, ‘you need to see it with your own eyes,’ and this is most definitely one of those times.

The Rose City dates all the way back to 300 B.C., as the capital of the Nabatean Kingdom.  It is, without a doubt, one of the world’s most richest and largest archaeological sites. It is surrounded by mountains filled with passages and gorges. 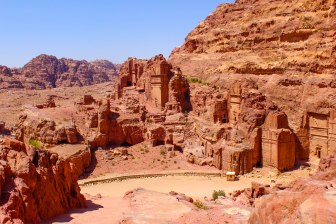 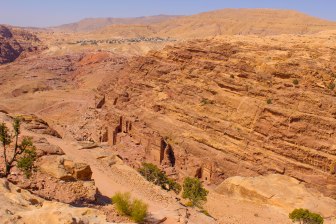 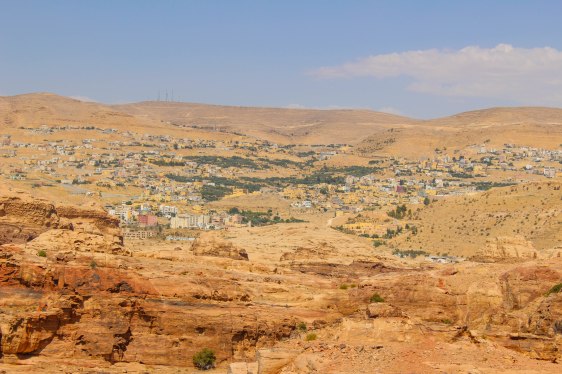 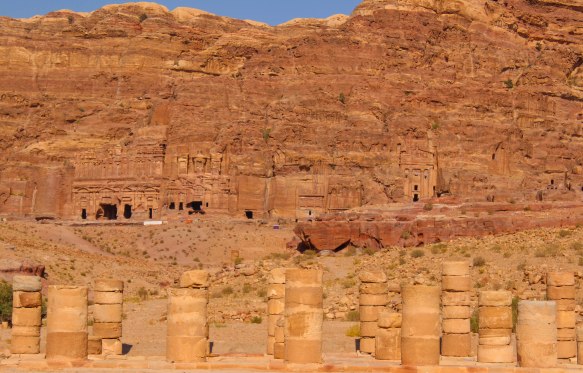 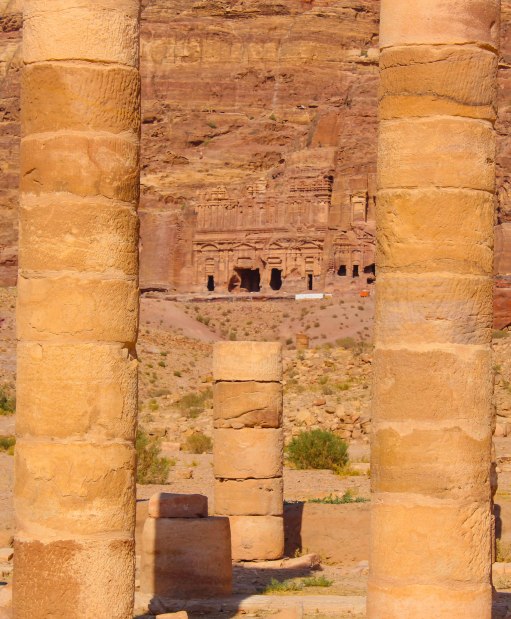 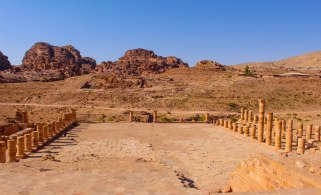 We walked, we climbed, we picked the highest peaks, for the best views.  We spent around seven hours taking it all in, and let me tell you, seven hours in 100 degree heat is no joke!  We managed to laugh, explore, chat with the locals, and not kill each other in our times of exhaustion. Throughout the course of the day, we rode on a horse, a donkey and a camel, in between all of our long treks around the Rose City.

We had a lot of fun walking into the ‘houses’ built into the stone.  Eyad and I gave each other proper tours around the houses, showing off the glamorous kitchens, powder rooms, and wall art.  We mastered the art of real estate convincing each to purchase a few carved one and two bedroom properties. 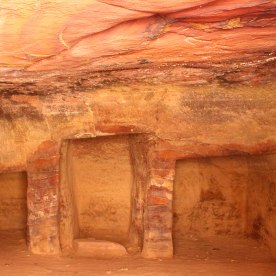 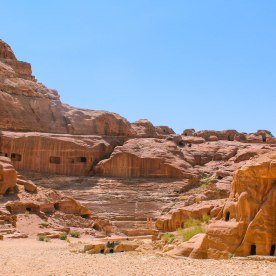 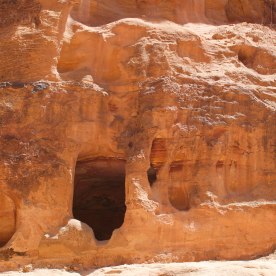 Go see it, experience it for yourself!  Enjoy chatting with the local Jordanians.  Some of who actually dress and wear black eyeliner like a pirate.  They are there own culture and embrace the true Bedouin lifestyle. 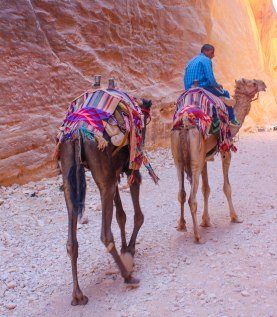 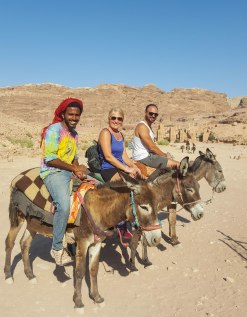