Ask any one of my people…”What’s Trish’s drink of choice?” They will answer with extreme clarity, TEQUILA!  With this in mind, I absolutely could not pass up the opportunity to come to Mexico to celebrate Dia de los Muertos with the locals. 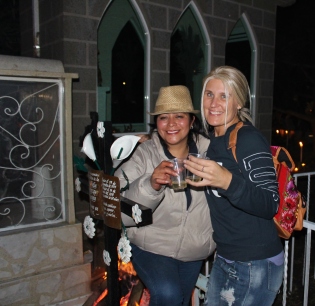 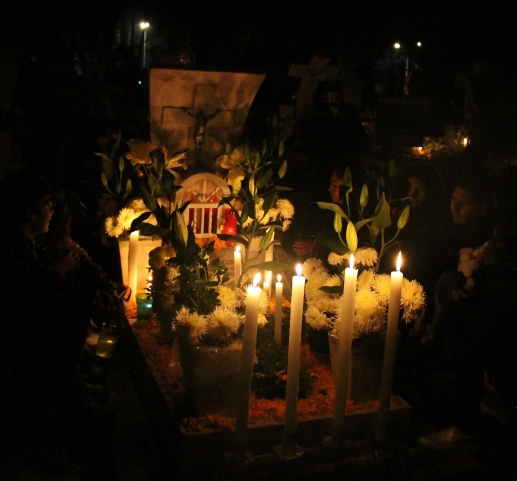 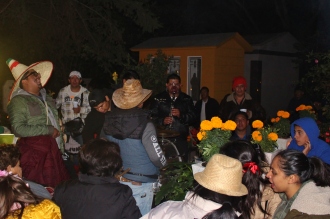 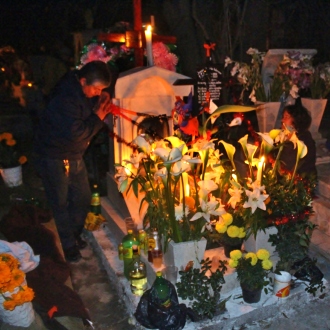 Prayers at the gravesite

Spending the Night with the Dead

IT, One of Many 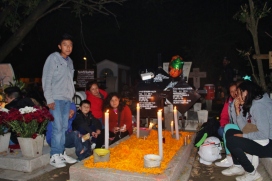 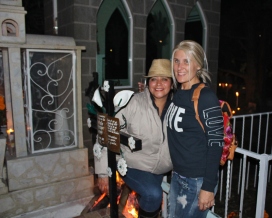 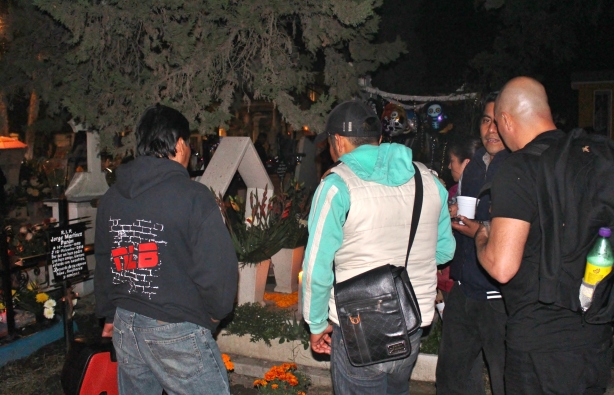 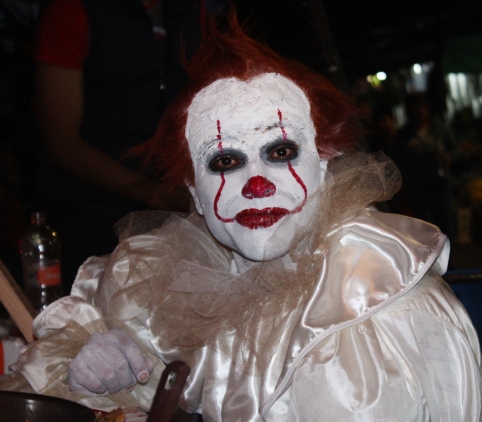 Offerings of Corona and Coke

Even the Kids Celebrate 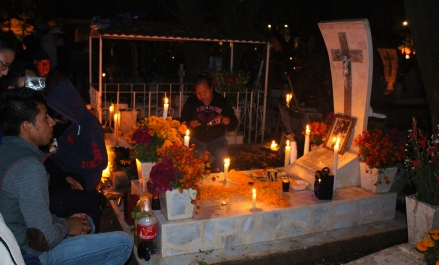 Camping with Loved Ones 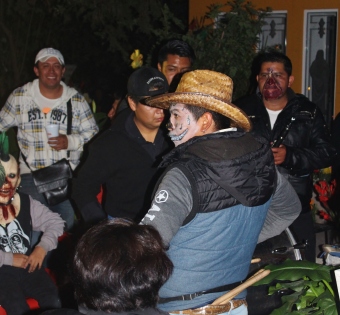 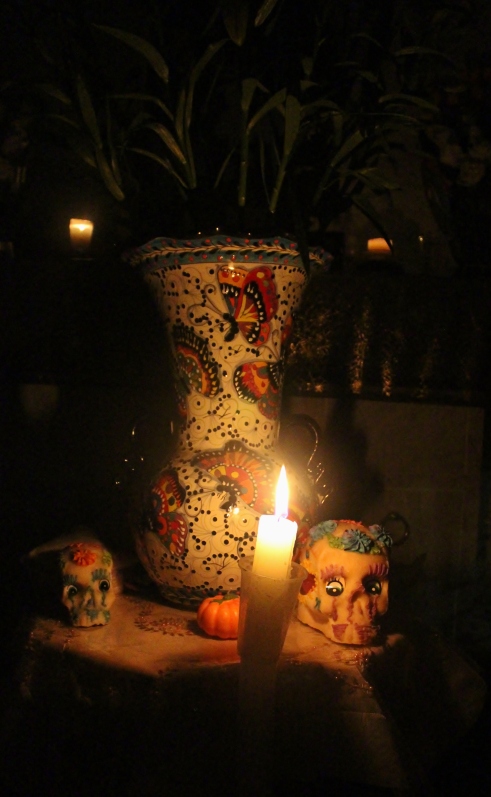 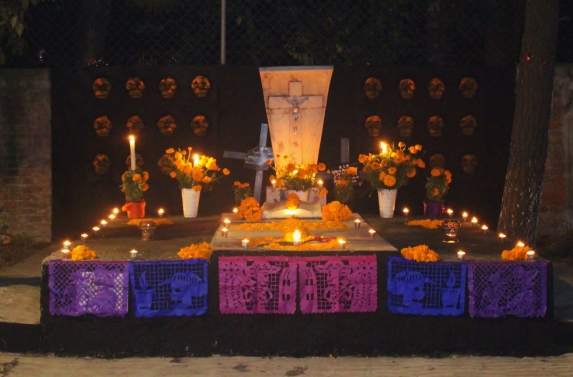 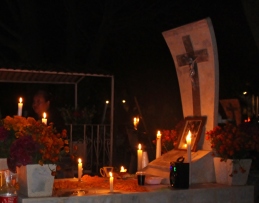 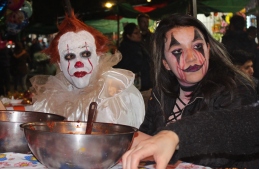 Everyone’s got to Eat

Celebration of Life with Friends

Mariachi Bands at the Graveyard

After a picturesque cruise into the sights and sounds of Xochimilco, we met up with the tour operator and a few others from the ‘tequila crew’, who had finally arrived to the boats.  We were a step ahead of them, and not willing to waste precious time, so we said our greetings, and hopped on the empty bus to catch a ride to a nearby cemetery called Panteón Jilotepec.   This particular cemetery was the perfect place to be, open 24 hours during the festival, a graveyard where many of the Royal Families of Mexico are buried.

Before I dive into my experience in the cemetery, let me give you a brief history into the meaning of Dia de los Muertos.  Day of the Dead is a long-standing Aztec tradition to celebrate, rather than mourn, dead family members.  Much before the European conquest, the Aztecs buried their loved ones in the kitchen floors in order to keep the dead a part of their family.  The Aztecs made alters, called ofrendas, to welcome the souls of the dead back into their homes to reunite with the living.  They used these ofrendas to provide the deceased with the elements of nature, and used flowers to light the path for them to follow.  (You will see many orange flowers called Cempasuchil in my photos, these brightly colored orange/yellow flowers have a strong aroma which is said to attract the spirits, helping them find their way to their loved ones) The elements offered to the dead are water, fire, (smoke from incense to connect to spiritual world and harmonize with nature) earth ( fruits, food) and wind (paper). Photographs are placed on alters to dedicate relatives, and plenty of food and drink the deceased enjoyed are left on their burial site so they can rejoice when they visit.  A common site on the tombstones are tequila, beer,coke, bread and cigarettes.

“The life of the dead is placed in the memory of the living.” — Marcus Tullius Cicero

This quote says it all…As we entered the cemetery we walked into a lively scene, a commemorative wonderland if you will; filled with the sounds of mariachi music, light filled vigils, savory aromas of food from families and vendors, brightly colored flowers, tequila, smiles, painted faces, animated costumes, laughs and offerings for the departed.  I had no expectations walking in, but this exceeded any thought I had in my mind.

Walking around the tombstones we were greeted by a family who welcomed us in as their own.  Jorge and Ericka were at the cemetery to rejoice in the life of their grandfather with their entire family; cousins, brothers, sisters, and children.  As soon as we began talking we were greeted with shots of tequila and conversation.  As much as I was intrigued by them, they were intrigued by my curiousity.  We took pictures, we laughed, we drank, and we enjoyed each other’s company.  After spending about an hour with this fun-loving family, we were filled with tequila, stories, and an upbeat experience.  It was time to grab some food and continue our adventures around the cemetery.

This was not the only family that gave us such a warm greeting and welcomed us into their celebrations, we stayed in the cemetery for over five hours, talking with many families, and spending an extended time with three other families.

The second family we encountered had a different way of celebrating.  They removed themselves from all of the noise and festivities to embrace the tradition in their own more personal way.  They sat inside a mausoleum, drinking and chatting quietly among themselves.  The mausoleum was particularly beautiful and I could not resist asking if it was ok to photograph the moment.  We were welcomed warmly and invited to come inside to talk and, of course, drink some tequila with them.  This was a particular somber moment for me, knowing that each family celebrated in their own way, but most were pleased to embrace the intrusion of foreigners.

Our next encounter was a few younger kids outside, having a few beers and talking around a fire they made in front of their grandfathers tomb. This impressed me because it showed how these traditions hold strong in the minds of the young and old.  It was humbling to be able to speak to such a variety of ages about the culture and traditions, and to feel and hear how important this celebration was to them.

The last lengthy encounter we had was with a lively bunch with a private mariachi band, a microphone, and a great deal of singing.  They were immersed in the festival with upbeat spirits and more tequila than one could ever dream of.  At that time, it was into the morning hours, but we attempted to sing and be a part of their graveside party.

After all of this fun, we could see the sun was starting to rise, and it was time to head home.  My head was clouded with tequila, but also filled with all the information I took in and all the beauty I experienced. My heart was filled with joy and warmth from the abundance of love we were shown as ‘outsiders’ to the tradition.  I couldn’t have asked for a better experience.  I recommend this celebration to ANY and ALL who have an interest in Dia de los Muertos!